Summer at the Beach - Juno Beach, Normandy, France, on the 71st anniversary of D-Day

The Fine Art of Taking the Summer Off

This is the first blog I’ve written since I retired six weeks ago. And I’m writing it under the patio umbrella. On my deck. In my backyard. I’m listening to the soft gurgle of water in the fountain.  (Okay, it’s not really a fountain; it’s a Made in China, 3-level fibreglass water feature that we bought from Rona a couple of years ago and it’ll probably fall apart at the end of this summer, but it’s the thought that counts. Besides, the birds really like it.)

Speaking of birds, we’ve had a family of magpies hanging around our end of the crescent since we got back from Europe. They do a lot of squawking. They remind me of the doomsayers who strive to convince you everyday that today is probably going to be the day the Rachel Notley Socialists will bring about the end of the world as we know it!!

Or if not today, tomorrow for sure. Any day now….. aaaaannnny day….

I’m sure there will come a time when I once again care passionately enough about politics and current events and all the stuff we used to talk about on the radio to rant at length about it in this here blog.  In fact, right now I’d put money on that happening sometime after Labour Day. For the summer, though, I’m unplugging from all that and pretty much parking it by the side of the road.

Instead, this summer is about attempting to see a wider world than what’s apparent from behind the mic.  That might sound a bit counter-intuitive, considering the range of topics we used to explore on the show.  But remember what I said when I announced my retirement — you can take all those topics and group them all into about half a dozen distinct issues. So what better way to see the wider world than with a trip?

The original plan was to visit our daughter who’s finishing up her Master’s degree in London, England because, clearly, there is a parental obligation to stay in touch with your kids.  (Sometimes, being a parent is tough. This was not one of those times.) In the early going, it was a straightforward itinerary:  two weeks in the UK, with Jenny touring us around, um, wherever.

Then we discovered that if you fly from Canada to Europe with Icelandair, you can stop over in Reykjavik for up to 7 days, then fly on to your final destination as if you were flying non-stop, with no extra cost and considerably less jet lag.  It’s only a 6-hour flight from Edmonton to Reykjavik, and then another three hours to Heathrow.  Well, that sounded too good to pass up. I mean, Iceland. 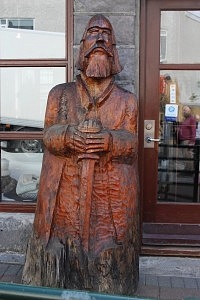 So we decided on four days in Iceland, which meant we’d be flying on to London on June 3. Which would put us practically within a stone’s throw of Normandy on June 6 — the 71st anniversary of D-Day. Should we go to Normandy? Bien sur! And bring Jenny with us. We flew into London on the night of the 3rd, stayed overnight at a pub hotel across the street from Waterloo Station, Jenny met us there the next morning for breakfast, we crossed the street to Waterloo Station and hopped the train for Portsmouth. From there we took a six-hour  ferry ride across the English Channel to Caen, stayed three nights in Caen, spent D-Day on Juno Beach — the Canadian landing site — then into Paris for three nights, then back to London on the Eurostar, the high speed train thru the Chunnel. (Everybody asks, “What was that like?” I dunno.  Something about zipping along at up to 300 km/h just rocks you like a baby.  I fell asleep not long after we left Paris behind and woke up about two minutes before we came out of the tunnel on the English side.) Three more days in London (seeing it like a local, with Jenny and her friends touring us around), then back home to Canada.

I figure my writing a blow-by-blow account of everything we did and saw would be as annoying as if I said, “Hey, let me show you our 816 pictures from Europe!”  (Editing them down to about 40 or 50 is a project yet to be tackled) So I’ll just talk about three things: 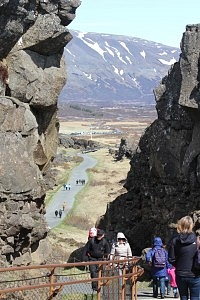 Thingvellir National Park, Iceland — on the tectonic plate rift. That’s North America on the left, Europe on the right, and in the middle, the site of the world’s first parliament, the Althingi, in AD 930

1)  Iceland. Go. It may be the most alien place you ever experience. I figure it’s the closest I’ll ever come to standing on another planet. It’s barren, it’s windswept (and by wind, I mean a constant, unrelenting 80 km/h), steam shoots randomly out of hillsides, it stays light all night long in June, there are only 300,000 people in the entire country and the majority of them live in Reykjavik (there are about 100,000 people of Icelandic descent in Canada), there are hot springs, geysers (spelled geysir in Icelandic), waterfalls as big as Niagara, glaciers, and lava rock everywhere. And I can’t get the place out of my mind.

2)  Juno Beach on D-Day. I cannot begin to tell you what a moving experience that was. There were quite a few British veterans of the D-Day landing on board the ferry to Caen, most travelling with family members. There was only one Canadian D-Day vet at the ceremony at Juno Beach (and he was awarded the Legion d’Honneur, France’s highest honour). Getting to Normandy is becoming a challenge for the aged Brits. For most of the Canadians, it is now a beach too far. 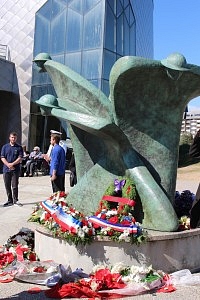 Wreaths and flowers lain at the cenotaph, Juno Beach Centre, on June 6 – the 71st anniversary of the Canadian landing on D-Day

Do the math and you realize that the youngest veterans of World War 2 (assuming they didn’t lie about their age in order to enlist) are now 88 years old. Most of the surviving D-Day (and WWII) veterans are today in their 90s. They were in their late teens and early 20s when they came ashore at Juno Beach, overcame formidable German defences and captured — liberated — more territory on that first day than either the British or the Americans.   They were younger then, than our kids are now. And they saved the world.

There is another Canadian connection as well, in that many Quebecois are descended from settlers from Normandy.

3)  Seeing Shakespeare standing up. This happened in London, at the Globe Theatre, which is a faithful reconstruction of Will Shakespeare’s original playhouse. The original Globe Theatre burned down 14 years after it opened when the firing of a cannon used as a prop in one of his performances — this was a thing, at the time — went terribly wrong. Shakespeare rebuilt, and the second Globe carried on until Oliver Cromwell shut it down in the 1640s because he was an early prototype of a Tea Party Republican. 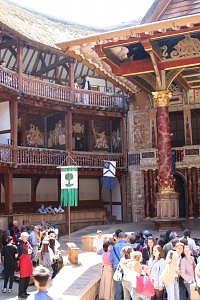 So this Globe opened in 1997, true to the original design, with a partial roof that covered the seating area and a “yard” — essentially the floor of the theatre, devoid of seating, open to the air and where people — “groundlings” stand to watch the performance. In Shakespeare’s time, the yard was where the rabble stood while the moneyed classes occupied the seats. There are drawbacks. If it’s a hot day and you stand in the sun, you will likely faint before the play is over. But if you can find a spot in the shade, it is an amazing way to see the play. You are close to the players and there is a physical and emotional connection between actor and audience that electrifies the experience for both. We saw “As You Like It” — and we certainly did.

Two other quick notes about life since we got back home from Europe:

We spent Canada Day doing the most Canadian thing possible — canoeing down the Bow River from Bowness Park to Inglewood. We’ve lived in Calgary for 30 years and although I have rafted the Bow from below the weir down to Sue Higgins Park, I can’t believe that I’ve never canoed the river before! It gives you a whole other perspective of Calgary.

And this week, I’m off to Toronto and I am not sure what to expect. I’ll be visiting my best friend from my Toronto years whom I’ve not seen nearly often enough in the last 30 years, in the hospital as he recovers from prostate cancer surgery. And I’ll be going to the CHUM Reunion. Unless you’re from Southern Ontario, that probably won’t mean anything to you. But CHUM was, when I landed a job there in 1975, the biggest Top 40 radio station in the country at a time when Top 40 was the biggest format on radio. It was radio Hollywood and, having been recruited by CHUM at the ripe old age of 21, I pretty much thought my you-know-what didn’t stink. Which was the attitude we pretty much all shared, since most of us were in our 20s or early 30s. I’ve always been compelled to live in the present, not the past, so it’s going to be strange to find myself in a room with a bunch of 60-somethings (and a few older than that) reliving much younger days. And yet….

I’ll tell you more when I get back.