Under construction -- new Habitat for Humanity homes for 4 YYC families

A BIT ABOUT US, AND SOME WORDS ABOUT SOMETHING IMPORTANT

This has been a big week in the Taylor household.  Martha is now retired, too.

Her last day at the Mount Royal University Foundation, where she was a fund development officer, was last Friday. Martha kept working through the summer so she could see the construction of the Mount Royal Conservatory’s magnificent new Bella Concert Hall and its performing arts centre through to its grand opening.  That happened last Wednesday.  Her retirement party was Thursday.  On Friday she turned in her keys and her parking pass and became a Free Woman. 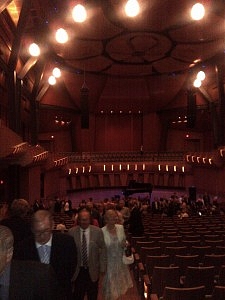 (By the way, what I blogged about the awesome sound of the Bella Concert Hall?  I guess that was a plug for the Significant Other’s Pet Project, but I meant every word I wrote.  You really must hear it, and if you don’t check it out, you’re really missing something!)

Both Martha and I are now free to pursue the things we want to pursue at whatever pace we want to set.  There are Noble Causes — those things we will volunteer to do because we believe in them, and/or we believe they’ll make the world, or the life of somebody in it, a little bit better.  There are Projects — those things others want us to do because they believe we’re good at that, but which remind us of work, and so for those things, we have to be paid. There’s the Fun Stuff — travel, hobbies, reading for pleasure, learning new things or how to do old things better, and of course cooking…and eating…and yes, we’ll have some wine with that…  (which leads inevitably to the thing we have to pursue — staying in shape so we can do all those other things without them killing us.)

Now, I know we’re not quite a week into this Retired-as-a-Couple thing, and not quite a week hardly makes a routine.  But here’s what we’ve done so far: on Saturday, we went to Canmore to celebrate Martha’s retirement with lunch at Crazyweed. We dined outside on the deck, surrounded by mountain vistas. The food and the wine were perfect. Although I haven’t checked with him personally, I am told that Crazyweed is the only restaurant that food critic John Gilchrist has ever given a 10 out of 10.  On Saturday, it was that good.

On Sunday, we drank coffee and had a late breakfast and talked about immediate and future plans well into the afternoon. It was remarkable because ever since I got into politics, Sundays have felt incredibly rushed at our house and full of chores that had to get done before the Madness would begin anew on the next day.

On Monday morning, we assisted with leading our first birding class with the Friends of Fish Creek Park Society. I try not to go on about it, because it’s about as interesting to non-birders as listening to golfers talk if you’re not a golfer. But Martha and I have been as serious birders as time would permit for over 30 years, and we’re now learning how to lead birding tours from the Jedi Master of birding in Calgary, Gus Yaki. We want to do this because we’re pretty good at it, and we love the experience of helping someone find a species they’ve never encountered before and seeing their delight. Most people can identify robins, sparrows, crows, starlings, and pigeons and maybe chickadees, but many have no idea of the vast array of shapes, sizes, colours, songs and habits of birds — over 270 species in Calgary, over 450 species native to Canada, over 900 in North America, and ten thousand species of birds worldwide.

And on Tuesday, we both did something important. 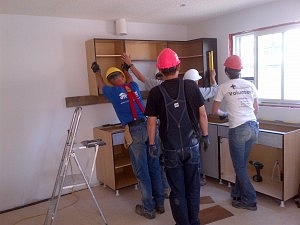 We spent the day volunteering with Habitat for Humanity, helping build somebody a home. This time we were at the build site in Radisson, working on one of the units in the fourplex Habitat is building there. Martha was part of the crew installing the kitchen cabinets. I and three other volunteers painted the upper floor of the unit — 3 bedrooms, a bathroom, closets, the hall and down the stairs to the main floor. The families who own the four units will move in as each unit is finished.  I’m told the family belonging to our unit today will be moving in next month. Habitat homes are affordable homes for deserving families, and I have to tell you that the feeling you get after spending a day at a Habitat construction site is one of the most rewarding, fulfilling experiences I’ve ever had.

Habitat for Humanity is always looking for volunteers.  All their houses are built primarily by volunteers — and by the people who will own and live in them.  Habitat partner families each put in 500 hours of sweat equity in lieu of a cash down payment.  Simply put, the more volunteers there are, the more homes Habitat can build, the more quickly each home can be finished and therefore the more quickly the families can move in.  You can volunteer as often or as seldom as you wish — or your schedule permits.  If you’re looking for something to do that will leave you feeling proud of yourself and good about your fellow humans at the end of the “workday”, I highly recommend it.  And you don’t have to know anything about building houses.  They’ll teach you.