CAN AN OSTRICH HEAR WHEN IT STICKS ITS HEAD IN THE SAND?

IT REALLY IS TIME FOR SOME INCONVENIENT TRUTHS, IF BRIAN JEAN AND HIS ILK CAN PULL THEIR HEADS OUT OF THEIR HOLES LONG ENOUGH TO LISTEN

I’m sitting on a sun deck on beautiful Salt Spring Island, BC as I write this. We’ve been here for a week and I’ll admit, the world looks very different from this perspective than it does in Calgary. Take, for instance, the federal election. This is Elizabeth May’s riding. The Greens may not be much of a factor in this election anywhere outside the Left Coast, but here on Salt Spring they are pretty much the only factor. It’s clear the NDP has some support on this island — perhaps even enough that Liz May might be vulnerable if Tom Mulcair could actually create a nationwide Orange Wave. If this campaign stays the course (big If, as always), there is no question Mulcair will do well in BC on election night. But on Salt Spring? Doubtful. 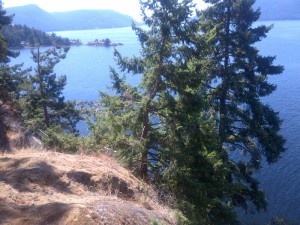 Now, I’m not suggesting that as Salt Spring Island goes, so goes the nation. I do not expect to live long enough to see that happen. But whether it’s Salt Spring, Saskatoon, or St. John’s, finding yourself someplace else looking back from the outside gives you a different perspective from what you get if you always stay home.

The Righties really should get out more. Travel. And by that, I mean to someplace other than Houston or Cardston or a hilltop in Idaho.

On Monday night, Premier Rachel Notley appeared in a Global News Women of Vision segment, discussing how she plans to make some progress on Alberta’s environmental and climate change record, likening that record to the “embarrassing cousin that no one wants to talk about.”

Wild Eyed Alliance leader Brian Jean immediately set his hair on fire. He’s been doing that with such regularity since Notley became premier that we’re on the verge of a province-wide Bic lighter shortage.

“This is just the latest example of the NDP putting ideology and economic experiments before reality,” Jean thundered in a statement on the party’s website. “The fact is Alberta has a proud story to tell about our environmental progress along with our resource development.” He went on to rant about all kinds of changes Alberta doesn’t need to make that he’s just sure those shifty-eyed socialists are gonna make, leaving the reader with the distinct impression that Brian Jean thinks everything in the oil patch would be just fine if Albertans hadn’t elected an NDP government.

Well, whatever gets you through the night, I guess…but honestly, you might as well believe in the tooth fairy, and for the same reasons: it’s comforting, it doesn’t require you to think, it explains that loonie you found under your pillow, and it conveniently accounts for the hole in your head.

But it has nothing to do with reality.

Here are the inconvenient truths that Brian Jean, Stephen Harper, and the usual suspects on the right are now desperately trying to deny, deflect, and avoid: