Happy New Year, tout le monde. I note that this is Day 3 of the carbon tax and the sky has not yet fallen, despite the best efforts of the reactionary right to convince you that it would — or will….just wait…any day now….

(I see that my Johnson & Johnson stock ticked upward nicely in December. I attribute this at least in part to CANE — Conservatives Against Nearly Everything — here in Alberta, aided and abetted by the Trumpistas in ‘Murica. It’s been a good month for Band-Aid sales, what with all the knuckle dragging.)

For the Taylor family, 2016 brought a lot more ups than downs. I know that’s not true for some people. I’m very grateful it was true for us. Every year has its share of unexpected turns, surprises, and a-ha! moments, and here are some of the ones we stumbled across.

In April, we headed south for a couple of weeks. We began the vacation staying with friends in Scottsdale, and ended in Tucson, where I caught up with a very old friend and incredibly talented, funny, insightful colleague — Mary Anne Lisney — with whom I worked at CHUM in Toronto half a lifetime ago. It’s a 90-minute drive from Scottsdale to Tucson; we decided to take the long way around, by way of Flagstaff, the Grand Canyon, Monument Valley in Utah, Mesa Verde in Colorado and Santa Fe, New Mexico. A road trip like that offers many highlights, but there were three genuine surprises along the way. 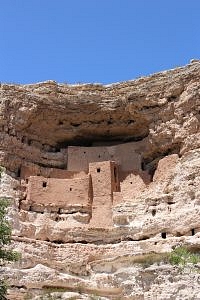 First, Montezuma Castle National Monument, en route north to Flagstaff. On a whim, we followed a sign and found ourselves, unexpectedly, gazing upon the first cliff dwellings we would encounter. We were expecting to see cliff dwellings in Mesa Verde; but these ones, unplanned and unknown to us, took our breath away. 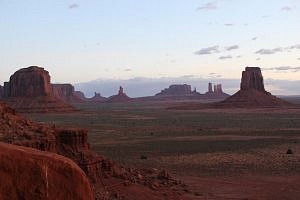 Second, a sunrise trek into Monument Valley with a Navajo guide. Standing and walking among these massive sandstone buttes as the rising sun dances off their surfaces, it becomes quite impossible not to believe in the existence of a Higher Power — whatever you conceive that to be. Third, breakfast with two Arizona Republicans at our B&B in Santa Fe. It was our first morning in Santa Fe, and their last. They were on their way back to Arizona to be delegates at a state Republican convention at which they were determined to try and find a way to stop Donald Trump. This was in April, remember…partway through the primary process, months from the Republican National Convention and more than half a year before the presidential election…and they were dismayed at the prospect of Trump winning and oddly curious about “..that young feller Trudeau you folks up in Canada just elected.”

This spring, Martha led the launch of a garden box program at our church, McDougall United, in partnership with Lord Beaverbrook High School as part of McDougall’s “Sharing Our Table” program in the community of Acadia. The idea was to encourage people to grow some of their own food by teaching them an easy way to do it in an urban setting — even on an apartment balcony. Students at Beaverbrook helped with the design of the garden boxes, cut all the lumber, and provided a tutorial on how to put them together for the cost of materials. Martha’s group then sold the boxes to McDougall parishioners and residents of Acadia for twice the cost of materials, and each garden box sold raised enough proceeds to provide a garden box for free or on a pay-what-you-can basis to needy community residents. They sold out, provided dozens of boxes for the needy, and have a waiting list of people signed up to buy boxes this year. And people who struggle with the monthly grocery bill grew plenty of their own fresh food for pennies a seed.

This summer, we vacationed on The Rock. We filled our bellies full of chowder and lobster, got our skin softened by the humidity and lightly coated with salt from the sea spray, sailed among icebergs, and had our eyes opened — again — to the bold and wondrous ongoing experiment that is Canada. This time, the reveal came at the tip of the Great Northern Peninsula of Newfoundland in a place both so small and remote as to appear utterly insignificant, and at the same time The Most Significant Place in the Americas: L’Anse-aux-Meadows.

One thousand and sixteen years ago, Leif Eirikson and perhaps 35 other men and women sailed their longship into the cove, came ashore, and made camp at L’Anse-aux-Meadows.  It became the Vikings’ base camp — a wintering site, ship repair facility, and staging area from which they would explore the country that Leif called “Vinland.” Archeological evidence, and geographic features referenced in the Viking sagas tell us that Vinland was primarily the lands surrounding the Gulf of St. Lawrence, although the Vikings may have ranged as far as the present-day cities of New York to the south and Quebec to the west. 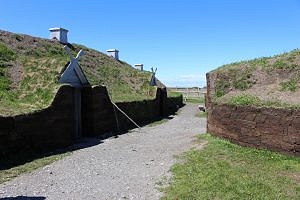 The settlement at L’Anse-aux-Meadows, at its peak, housed between 65 and 95 people including the first European baby born in the Americas — a boy named Snorri.  It may not have been continuously occupied, and even if it was, after likely no more than 10 years the Vikings packed up and went home to Greenland and Iceland, never to return.

That hardly seems, um, Significant, does it?

And yet it was arguably the most significant event in all of human history, because it closed the circle of human migration across the planet — a migration that began 100,000 years earlier. Over that time, humans spread out of Africa, to the north and west into Europe and, to the east, everywhere else on Earth.  Leif Eirikson’s voyage across Baffin Bay from Greenland to Baffin Island (Helluland — the land of slab stones), Labrador (Markland — the land of forests), and Vinland (the land of grapes and wine) led to First Contact between people from Europe and the people who were here — the people of the Americas.

It also explains why the Vikings left. 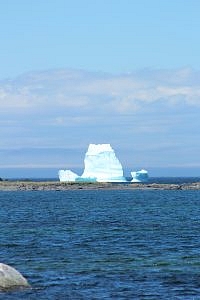 As they explored Atlantic Canada, they also managed to get into at least a couple of scuffles with the Skraelings, as they called the locals. The sagas — the old narratives of the Norse — make it pretty clear that the Vikings were the ones who started it. And of course, numbering no more than 95 people in total and probably more like 35 in any one exploring party, picking fights with the locals was a really stupid thing to do. Realizing they were vastly outnumbered, the Vikings retreated to L’Anse-aux-Meadows, where the decision was made to abandon Vinland entirely. The Vikings left almost nothing behind except the tales told in The Saga of the Greenlanders and The Saga of Eirik the Red. Some 950 years would pass before the first archeological evidence was unearthed at the northern tip of Newfoundland to prove that the Vikings had been here.

I have never been one to make a bucket list. But now, having been to L’Anse-aux-Meadows, looking across the reconstructed Viking settlement and the grassy mounds that remain of the original base camp, out to sea, beyond the iceberg nestled close into shore, with Labrador off to my left, Belle Isle straight ahead, and the next stop Greenland or Iceland, I now realize that if I had died without setting foot there, I would have missed something soul-stirring.

Our kids are all grown up, of course, and closer to their 30th birthdays than their 20th — which is still a source of great puzzlement to Martha and me as to how our children could be that old!!!! Here’s an a-ha! moment — our son and his girlfriend are engaged! Our son asked her a couple of weeks ago, and they proceeded to keep us in the dark until they got here for Christmas. (Kids these days!)

Our kids are building their careers and their lives, and if there’s an unexpected turn here, it’s that our conversations and interactions have become decidedly adult, in a way they never were when the kids were in university or even in the years immediately following their graduation. Then, they were in a state of becoming themselves, still trying to figure out what it means to strike out on one’s own as an independent being and stand on one’s own two feet. Now, it seems we talk more easily, much more as equals, and much less frequent are the phone calls where they’re seeking advice or we’re giving it. Had we thought about it, we would have seen it coming. Indeed, five years ago we were longing for it. But it sneaks up on you, and suddenly you notice the change, and you are very proud of them.

It gets you thinking — as one is wont to do in one’s first year and a half of retirement. It gets you thinking about, as they so euphemistically frame it, “the next chapter in your life.” Which of course is, if not also the last chapter, then at least the opening chapter of the final book of the trilogy of your life. You think about how you want to live, now that you no longer need to show up at the office everyday.  About what’s worth living for. About the vexatious things, events, issues and yes, people you should just walk away from. About which battles are still worth fighting, which battles you should leave to others, and, for that matter, whether there might be one or two new battles worth joining — or starting — just over that next hill.

And — never mind the battles — what’s over that next hill that you haven’t seen yet?

Welcome to 2017. Let’s enjoy the ride together.