I was in the middle of writing a rant on how everything’s going to hell…and then Calgary went ahead and re-elected Nenshi.

The idea for this piece — which I am now rewriting — came about a couple of weeks ago when I ran into Bruce Cameron at Moby’s Pub on Ganges Harbour.

We were there for the CD release party for the duo Ocie Elliott. Martha and I had been off island for a good part of September catching up with friends and family in Ontario and Calgary. By the time we got back to Salt Spring, Bruce and Susan had taken off to Toronto and New York. So it had been awhile since I’d seen Bruce, and I asked him how he’d been.

He shook his head. “Does it feel to you like the world’s gone crazy?”

He said he was thankful to be living on Salt Spring, this little island of sanity cut off (somewhat) from the troubles elsewhere. And I agreed. So am I. 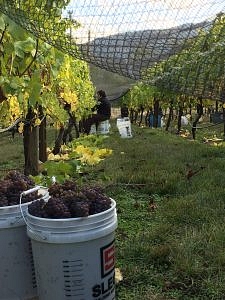 Here on Salt Spring Island, two-thirds of the way through October, the world looks quite serene. Ducks gather on water as calm as glass in the harbours and inlets. Hints of fall colour begin to emerge, although green still predominates. Flowers still bloom and the tables at the Saturday market still groan with fresh, local produce. The days are getting shorter and we’re easing into the rainy season. 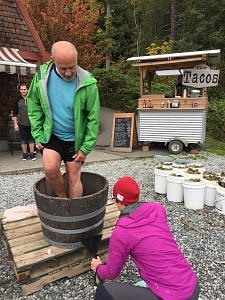 The grapes are harvested for next year’s wine. The mildly rancorous debate about municipal incorporation is behind us (the proposal was defeated) and the next fireworks will either be a big argument about whether to cull the island’s massive deer population or the actual fireworks they shoot off in Ganges Harbour on Halloween.

Here on Salt Spring, if you ignore media — mainstream or social — you can forget that anything’s amiss. You can avoid the wildfires, the hurricanes, the drip-drip-drip of American democracy slowly capitulating to the relentless march of fascism, Donald Trump’s daily lowering of the bar of basic human decency, the Las Vegas massacre, the systemic racism at the core of the American experience (why is it that the Las Vegas sheriff refuses to label white shooter Stephen Paddock a terrorist?), and worrying about Trump triggering nuclear war with North Korea.

The thing is, I can’t ignore mainstream or social media. (And neither can you, or you wouldn’t be reading this, would you?) So with increasing anxiety as election day crept closer, I watched the municipal election campaign in Calgary sinking into a swamp of dishonesty, pandering, and propaganda reminiscent of what passes for public discourse in the United States.

It’s been clear for months that an organized group of conservatives was seeking to target and take down every moderate and progressive voice in city government. It was equally clear that they had nothing to offer the voters of Calgary beyond an invitation to — with apologies to Peter Finch in the 1976 Paddy Chayefsky classic “Network” — “…get up, go to the window, and yell, ‘I’m mad as hell and I’m not gonna take it anymore!’” What was unclear to me, at this distance, was how much traction they were getting.

The Calgary I know — the community I represented in the Legislature, and with which I interacted daily on the radio for years — was forward-thinking and forward-looking. But the last couple of years have been very hard on a substantial number of Calgarians. Could it be that the general mood of the city had become one of fear, anger, lashing out, and longing for mythical good old days?

The media narrative — both mainstream and social — was that it had. At least for a time, mainstream and social media both swallowed, hook, line, and sinker, the improbable Mainstreet polls that showed challenger Bill Smith running up to seventeen points ahead of incumbent Naheed Nenshi in the race for mayor. Suddenly the story became the decline and probable fall of the Golden Boy, and how the voters had grown weary of his arrogance.

When challenged on the poll methodology, both Mainstreet Research and the organization that commissioned it, Postmedia, doubled down.

That the polling firm would dig in its heels when its work was criticized is understandable, if more than a little heavy-handed. (Respected pollster Janet Brown and academics Duane Bratt of MRU and Melanee Thomas from U of C all report being, in essence, bullied for their criticisms.) That Postmedia’s Calgary Herald — as Brown tweeted — “..stood by silently while experts their reporters had interviewed were threatened with payback” is beyond the pale.

That tweet was from Wednesday (Oct 18), along with this one from Brown: “A rehash of obvious problems with polls that @calgaryherald was warned about but disregarded and ran with false narrative instead.” (The italics are mine, but the words are Brown’s)

Fortunately for Calgary, the voters turned out in what, for a municipal election in Alberta, were droves: 58 percent voter turnout, the highest in over 40 years. They voted to return Nenshi to the mayor’s office and Druh Farrell, Evan Woolley, and Gian Carlo-Carra to City Council — all of them, councillors who have worked hard to make Calgary a 21st century city, who’ve recognized Calgary’s potential to be a Great City. The voters repudiated the talk of a “tax revolt”, repudiated the efforts to forever enshrine the car, truck or SUV as the only approved method of getting around town, repudiated suburban sprawl as the ideal means of growth, repudiated welfare handouts for billionaire team owners, repudiated going backward and embraced moving forward, and most of all, repudiated the Old Boys Club’s sense of entitlement.

I’m sure Quito Maggi and David Valentin from Mainstreet Research will engage in some serious navel-gazing, get back in the game and produce some good polls again — with a little more humility going forward.

I’m certain the Calgary Herald will learn nothing from this and will continue relentlessly cheerleading for the Right as its journalistic credibility circles the drain.

I’m equally sure that Monday’s Calgary election results were a setback for the conservative “movement” in Alberta (when I was a wee tyke, my parents called having a poop a “movement”). The municipal campaign was obviously a trial run of the dogs Jason Kenney plans to unleash on the New Democrats — and this time, those dogs wouldn’t hunt.

I’m less certain that anyone who considers themselves a centrist, a moderate or a progressive should allow themselves to get complacent.

Most people just want to live and let live and hope their children will inherit a little better world than they did. They don’t need, or want, to rule the world.

And then there are those who do — those for whom no amount of money or power is ever enough. They may be zealots. Or they may hold no ideology whatsoever. Maybe they want to control your body. Maybe they want to get rich at your expense. Maybe they fear their own power and influence slipping away, in a world that’s changing around them. Maybe they just love having underlings bow and scrape and blow sunshine up their butts. Maybe they hate your kind.

But whatever their motivation, they’re not in it for you. They’re in it for themselves. They don’t care how much damage they do in their quest for power. And they don’t give up.

Winter has been delayed. Remain vigilant.