Breakfast on the deck - in April.

“This” is the task of writing my first rant since relocating to paradise. Since my typing skills were honed in the newsroom, I do this mostly using two fingers while looking at the keyboard. So I have to take my eyes off the view! 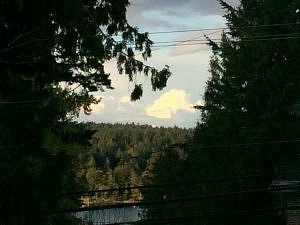 The view at dusk

Salt Spring Island is so stunningly beautiful that one morning not long after we moved in, as we were sitting with our coffee gazing out at the sailboat moored in the water directly across the road from our house, I said to Martha, “Do you think we might be dead?”

I am happy to report that we are both still very much alive. And if it turns out that there is no afterlife, I will die having already been in heaven.

On that note: I think there is a God —  in other words, someone, something, some (pardon the Star Wars reference) “force” of nature or quantum physics that completely surpasses human understanding. But for a moment, let’s just pretend that God really is that old white guy on the ceiling of the Sistine Chapel. Or Morgan Freeman. Or a woman. Could God in any way resemble a human without having a sense of humour? In which case, I think He (She) (They?) would design an afterlife very much like Salt Spring Island — paradise with enough quirks, and characters, and character to keep a soul intrigued and entranced for an eternity.

We’ve been here only a month. That’s enough time to make our new house feel like home, which is to say, all the furniture is arranged, the pictures are hung, the dishes are put away, the books are back on the shelves, and the tchotchkes have their place. We’ve planted a palm tree — okay, it’ll be a tree in another 5-6 years — and we can get the car in the garage again. We’re beginning to get to know a number of people who live here and we’re starting to get the lay of the land. Obviously, a month is not nearly long enough to truly know this place — but oh, I do like what I’ve seen so far. 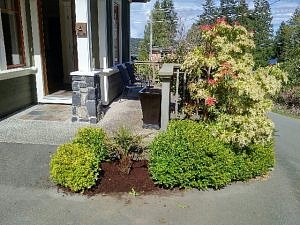 Highlights? Well, it’s early days, but here are a couple of things that stand out.

We’ve been to the Gumboot Gala at the Fulford Community Hall to experience the music of Valdy and Bill Henderson of Chilliwack and about a dozen other musicians so talented they should all be famous. Didn’t even know there was such a thing as the Gumboot Gala, but I stumbled across a reference to it in my Twitter feed, Googled it, bought tickets and off we went, thinking that it would give us a good sampling of the island music scene. I have seen more concerts than I can remember — the primary perk of working in rock radio all those years. One or two stunk (the worst was Marvin Gaye, dressed like a leacherous yachtsman, leering at his backup singers, and — I’m pretty sure — coked out of his gourd). Most have been great. A few have been phenomenal. Here are my top three:

We’ve been to a packed, contentious, yet unfailingly polite annual meeting of the North Salt Spring Waterworks District. (We were there as observers. We haven’t lived here long enough for them to let us have a vote, although they’re gladly taking our money.) Salt Spring Island has a Mediterranean climate and water shortage is a huge issue here. There are really only two seasons: a cool rainy season that takes the place of winter, and summer — dry, warm, and often surprisingly hot. Salt Spring has experienced drought conditions and severe restrictions on water use the last two summers. This summer may be better, or maybe not. Because the island doesn’t have much capacity to store the rainwater, things just dry up in summer. So water causes conflicts — although, as far as we’ve been able to discern, very civil ones involving the signing of petitions, the orderly holding of a picket sign, and a spokesperson for a ratepayers group whose water tax has been jacked up and who were denied a vote at the meeting for reasons that seemed, well, hard to justify (Please understand, I’ve just moved here and I don’t know the full back story). All she wanted was for the Chair of the Waterworks District to agree to meet with the group, and to these eyes he dodged and weaved like an Alberta PC MLA. Had this been Alberta, I’m pretty sure there would have been shouting. But she remained unflappable, insistent — and nice.

Moving to any new place would probably keep you busy enough for the first month to lose touch a little with the day-to-day trials and troubles of a wider world. Moving to a place like this — which is an island, fercryinoutloud! as well as a little piece of heaven — just encourages a person to leave the radio off, skip the TV news, leave the paper unopened and social media unchecked, and carry on blissfully ignorant of the Rest of the World. So I have a vague understanding that Jason Kenney is missing, Kevin O’Leary is gone, Christy Clark might be soon, Donald Trump is not, and North Korea is increasingly becoming a problem for us all. Plus I have to learn all about earthquakes now.

But I promise to strike a balance between tracking the goings-on of the millions and billions trapped(?) on various sections of the mainland and documenting the lives of the 11 thousand hippies, greenies, working stiffs, retirees, organic farmers, wine and craft beer makers and distillers, writers, artists, poets, musicians, muses, cooks, craftsmen and women, artisans and generally creative folk who make Salt Spring Island their permanent and most interesting home….and I will write about it all.