When we announced that we were moving here and got the inevitable question — “Why?” — I would often say that after 32 years of living in Calgary, I wanted to get back in touch with my inner hippie. (As I write this, I’m looking across our driveway at a guy working in the communal vegetable garden next door who is a doppleganger for Captain Jack Sparrow from “Pirates of the Caribbean.”)

I imagine that 50 years ago during the Summer of Love, Salt Spring would’ve been a much easier place than Calgary to be a hippie. Hippie culture’s roots on this island go back that far and many of its best parts, I would argue — growing whole, natural, organic food, sharing with your neighbours, love of nature, music and art, and working in common cause — have become ingrained in Island culture.

Two other enduring hippie traditions are a healthy disrespect for authority….and hitchhiking.

Indeed, this might be the last place in Canada where hitchhiking is a regular, safe, and accepted mode of transit, right alongside cars, pedestrians, public transit, Vespas and bicycles. The best known and best loved spot for hitching a ride is where the demonstrators in the photo above gathered to protest yesterday — on the main drag, outside Embe Bakery at the foot of the hill just as you’re leaving downtown Ganges. And the protestors were there because the authorities are planning to shut it down.

It’s estimated that the protestors numbered in the hundreds. So far, over a thousand signatures have been collected on an online petition to the island’s newly minted Green Party MLA, Adam Olsen. The petition, at change.org, asks Olsen to help save the hitchhiking stop and “…the cultural tradition of ride sharing on Salt Spring.”

That’s right — Salt Spring was Uber before Uber was invented. And for no charge, to boot.

This much we know — the BC Ministry of Transportation decided to erect a barrier blocking cars from stopping in front of the bakery to pick up hitchhikers, and left the dirty work of publicly announcing their decision to the local Transportation Committee. But who initiated it — and whether this is part of a wider crackdown — is unclear, and a source of considerable suspicion.

All that the RCMP have said thus far is that there is a safety concern about where vehicles stop to pick hitchhikers up, the implication being that the safety concern involves this particular stop at the foot of Ganges Hill. The police also say Ministry officials have paid a number of visits to Salt Spring in the last year to consult about traffic safety issues — again, the implication being that the Ministry got this ball rolling.

But outraged Salt Springers are having none of that. The petition accuses the RCMP of initiating it, saying the it’s the Mounties who want the hitchhiking spot gone and who went to the Ministry seeking to have the barrier put up outside the bakery, “..where the fourth generation islander owners are happy to host hitchhikers.” (In Calgary, it is often said, nobody cares who your father was. On Salt Spring, from time to time and depending on the issue, deep roots count.) The petition goes on to say, “The barrier will prevent hitchhiking from the shoulder and the RCMP will then ticket people who pick up people off the roadside.”

To a lot of Salt Springers, that’s being interpreted to mean the RCMP have decided to crack down on hitchhiking everywhere on the island. One protestor even suggested to me yesterday that the problem is there are some new RCMP officers on the island and, she said, “It’s gonna take awhile to mellow them out.”

I’m just a newly arrived resident here, a retiree with neither media nor political credentials, so I cannot verify whether the RCMP is planning an islandwide hitchhiking crackdown or a ticketing blitz, or whether the sergeant-in-charge or various other officers stationed on the island might be new arrivals, buckeroos, or pickle-up-the-you-know-where, by-the-book types determined to crack down on the rampant lawlessness they’ve been appalled to find here on this frontier outpost. The whiskey trade, as far as I can tell, is under control, over-regulated by the provincial liquor control agency as is the Canadian way. And as for the cannibis trade, well, I can’t comment (although the local supermarket has a huge chip and snack aisle relative to the island’s permanent population.) 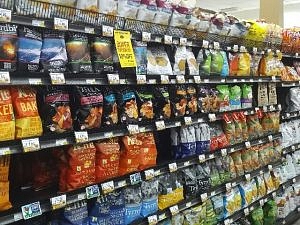 Snack aisle at the supermarket

But I can say this is likely to end in tears and/or shame for the RCMP — who not only have to enforce the law but also get along with the folks who live here — and/or the Ministry of Transportation, which likes to claim ownership of the main road on the island but can’t seem to provide even so much as a decently level and wide shoulder for people to bicycle or walk on, let alone an actual sidewalk or pathway.

The authorities are right — there is a safety issue for pedestrians and cyclists, on both sides of a busy, narrow two-lane road climbing a steep hill with curves a driver can’t see around. For hitchhikers standing at the bottom of the hill, thumb out, beside the Embe Bakery sign — where everyone is expecting them to be, as has been the case for decades now?