IF THERE IS A HEAVEN FOR CATS, I HOPE IT IS SUNNY, WARM, AND FILLED WITH MICE, FRESH SALMON, AND THE SPIRITS OF CAT-LOVING PEOPLE

We are soon going to have to say goodbye to our cat, Max.

Max, who goes by many nicknames – Maxwell, Catticus Maximus, the Maximum Cat Allowed by Law, The Wusserman, The Striped Flash – is a ten-and-a-half year old, 17 pound giant of a feline with a voracious appetite whom we adopted as a tiny kitten from the Calgary Humane Society.

We had gone there looking for a cat to adopt, and I guess you could say Max passed the audition and landed the role when he climbed up onto my then 13-year old daughter Jenny’s shoulder, nuzzled against her neck, and settled in right there. It was an immediate bond formed between cat and girl – and between girl and cat. Max was still small enough to curl up on Jenny’s shoulder. He was only a little over two weeks old at the time.

The Humane Society said we could take him home once he was six weeks old and had been neutered. Once we brought him home, Max was still small enough to curl up on Jenny’s shoulder, or in the hood of her hoodies – for a few days.

Then, a handful of weeks after that, he started getting too big to crawl under the TV stand, and then under the sofa, and then under the beds, and he just kept growing and growing until he had become the Maximum Cat Allowed by Law. Had he grown any bigger, we were sure someone would’ve called the authorities to report a cougar or a bobcat roaming the neighborhood, and the next thing you know, Fish and Wildlife would’ve captured him and relocated him to the mountains. 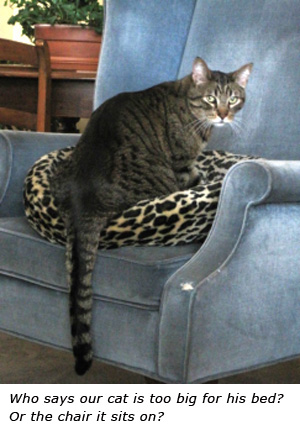  
Thankfully that never happened – and I’m sure Fish and Wildlife would’ve known the difference, just as they did years ago when someone reported a cougar that turned out to be an unusually large house cat prowling in Edgemont. I remember covering that story.

Two days before Christmas, Max ate about half his breakfast and turned up his nose at the rest. We couldn’t get him to eat more anything on Christmas Eve, or more than a few morsels on Christmas Day. On Boxing Day morning, we took him to the C.A.R.E. Centre Animal Hospital. Later that afternoon, the vet called with a probably diagnosis of intestinal lymphoma – cancer. As I write this, we are still awaiting the definitive test results that will confirm the diagnosis, but there is virtually no possibility that it can be anything else.

Max’s early years were a bit traumatic. He went missing for three days when he was 9 or 10 months old. We figure he must have been “treed” by a coyote and was afraid to come down, but once he did, he found his way home at 3:00 AM, hungry and scared and missing a patch of fur from his tail.

When he was about one-and-a-half, he broke his left front paw and dislocated his wrist. The vet figured he might have got his claw caught, trying to scale a fence. He needed surgery, and his leg was in a cast for eight weeks, during which we had to set up his food and water dishes on our family room fireplace hearth which is raised about six inches off the floor, because he couldn’t crouch down to reach his food otherwise. Our downstairs bathroom became his bathroom. We improvised a litter “box” of kitty litter on top of a big orange garbage bag split open on top of a big slab of cardboard on the bathroom floor – because he couldn’t manoeuvre in and out of a regular litter box.

But the leg healed perfectly, although to this day Max limply holds up that “sore paw” whenever he really wants something. And all it cost was $2000 in vet bills, after which we promptly signed up for pet insurance, and Max never got sick or hurt again.

Until a few days ago.

Max is home now, and he’s doing quite well, thank you. He’s on prednisone, a steroid which works as chemotherapy for lymphoma in cats, without any nasty side effects – although we’re told it may cause him to lose his whiskers. It has restored his appetite, eliminated his symptoms, and he’s acting like his old self. It will probably put his cancer into remission…perhaps for a couple of weeks, possibly a couple of months, but almost certainly no longer.

We could try prednisone in combination with other chemo drugs, and they might buy him some additional weeks…or not. Ultimately, the lymphoma will prevail.

The vet says it will be pretty easy to tell when the prednisone is no longer working. When we see the symptoms reappear, we will have him euthanized. He’s had an awesome life, and we don’t want him to suffer. 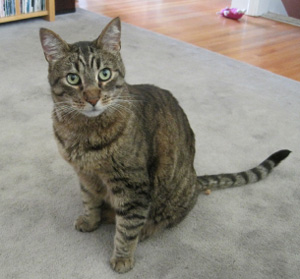 Max won’t get to spend any more time outdoors, but in the time he has remaining he will get as much food as he wants, and lots of treats, and plenty of shoulder massages and scratches on the head and around the ears and under the chin, and as much lap time as he wants. And given that he’s always been an affectionate cat, he will return the love and he will know that he is loved as he has always been.

I’ve had a few cats in my lifetime. Max has lived the longest of them all and I am grateful for that. I don’t know whether we’ll get another, but if we don’t, we saved the best for last.