THE MEANING OF LIFE…

So, it’s the day after the federal by-election in Calgary Centre – and two others in BC and Ontario. It must be time to examine the entrails on this metaphorical goat* to divine deep meaning and insights into the mind of voter and the future of the nation.

(*Sooth sayers in ancient Greece used to examine the entrails of goats to determine what the future would hold and what sooths they should sayeth. From such beginnings springs the modern art of punditry, and the accuracy rate is about the same.)

As Austin Powers might ask at an international moment of mystery such as this, “What’s it all mean, Basil?”

Well, aside from the fact that the final results were almost exactly as the pollsters called it – 37 percent Crockatt (Conservative), 33 percent Locke (Liberal), 25 percent Turner (Green) – and the fuss being made by both the local and 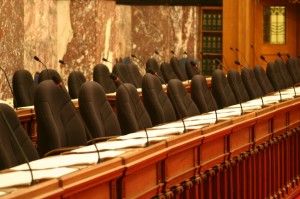 national media that this was a nailbiter, a wakeup call to the Conservatives, and/or a sure sign that, awake or asleep, the Conservatives will remain in power for the rest of our lives thanks to progressive vote splitting, what it really means is summed up in the e-mail that political research consultant Janet Brown sent me this morning, and I quote:

“I think the big story everyone is missing today is apathy. With 29.4 percent voter turnout, the message sent isn’t that the riding leans left or right. It’s that this riding doesn’t care who represents them in Ottawa.”

The Calgary Centre by-election captured the imaginations of the hyper-engaged – those folks who are already deeply involved in the affairs of their community, or who follow politics and public affairs with a passion, or both. Liberal Harvey Locke, Green Chris Turner, and New Democrat Dan Meades were all quality candidates with the capacity to motivate the hyper-engaged. But the regular folks stayed on the sidelines. Unlike the Nenshi phenomenon in 2010, the hyper-engaged this time couldn’t persuade the regular folks that voting in a by-election mattered.

So is apathy wrong? Well, over time, apathy will kill the democratic process. No need to behave yourself in power and to act in the public interest if the vast majority of the public doesn’t care.

But nowhere is it written that the people have to care. Apathy is one of the things that people in a democracy are free to choose. And because voters vastly outnumber those who seek their votes, I contend that it’s up to those seeking their votes to present voters with a value proposition sufficiently enticing to get them to stop what they’re doing and go vote!

I respectfully suggest that any one of the three so-called “progressive” candidates had the right stuff to do that. But when you put all three together in a room and they started sniping at one another, it was like watching three ministers from different Protestant denominations argue over who possessed the true path to eternal life – wonderfully inspiring for each pastor’s faithful followers, but for everyone else in the crowd, a compelling argument for Agnosticism and Sunday brunch.

Yes, it’s complicated, just like life and – well – faith. But the challenge for the so-called “progressives” (and no, I don’t like that word, because it is not a word that regular folks in Calgary use to describe themselves, so why are those who seek their votes using it?) is to stop fighting among yourselves about stuff that doesn’t matter to most people. You’re turning the voters off and you’re driving them away. Give people a reason to come into your temple instead of trying to convince them to stay out of the one across the street.

Will it work? Will it get you elected? Will it increase voter turnout? Will it give us a healthier democracy? I don’t know, but I figure it’s worth an honest try.

Because it ain’t workin’ the way you’re doing it now.